We are using LED TVs for many years and we think we know everything about the elements required for a television to be specified as good. But the truth is there are many terms that you don’t know Among these terms, there is one called DSE: Dirty Screen Effect. So what is the Dirty Screen Effect On a TV?

It is one of the popular terms that is used often by TV reviewers and tech enthusiasts. You purchase a new TV but after some days you found something wrong with the display then it might happen that your TV is suffering from a dirty screen effect.

DSE is the term that comes under the Grey Uniformity Test and our first recommendation to all new TV buyers is to perform the Grey uniformity test after the purchase.

OK, now in this article we will explain what is dirty screen effect? How does it look? What are the causes of the DSE? How can you check? And how to get rid of it?

Recommended: What are IPS and VA Panels in LED TVs

What is The Dirty Screen Effect?

The word Dirty Screen effect refers to a term that is used to describe the LCD panel. The described LCD panel attains the inconsistent luminance performance which is available in the surface area.

This can appear as a uniform line, wide bars, and splotches. Sometimes it also appears like slight darkness in the corners.

Every TV is engaged with an LED backlight and also attains the availability of an LCD backlight. The appearance of the DSE has been en in most of the LCD-based TVs infant all types of LCD TVs whether it is LED, QLED or mini LED.

So, it doesn’t matter what type of TV you have, if the base of the TV-related is to the LED model then it may cause the issue of the Dirty Screen effect.

It is not mandatory that DSE will always appear as round patches. The situation that I have encountered is DSE as long strip patches as you can see in the above and below images.

Whereas there is a more popular way to see the dirty screen effect is by Playing hockey on your TV then also you can see the effect of dirty screen patches on your TV. When the whole screen becomes green due to grass then the patches in the corner get visible.

What Forces The Dirty Screen Effect?

Having a Dirty screen issue in your LCD can be recognized as the manufacturing effect. The availability of numerous variables can be introduced as the reason for having the issue of the Dirty screen effect.

The most basic sign of having the issue of the dirty screen effect is the availability of low brightness on your screen. This issue will occur in the variance in the backlight.

During the manufacturing of the LCD panels, some of the pixels are settled up in the LCD but are less brightened. This inactive pixel will generate the issue of the Dirty screen effect.

To deal with it the companies place various levels of quality checks. The manufacturers will quality checks to detect the error in the screen and the pixels.

Another reason for having the issue is damage during shipping and delivery. If the TV gets mishandled by the seller or user while installing the TV then it will also cause the dirty screen effect.

How Common is The Dirty Screen Effect?

Well, there is no evidential data on the seriousness of this issue on the screen of the LCD. We have studied various reviews and customer suggestions of this problem and after examining them we can say that it is a primarily common issue which is seen in LCD TVs.

With the help of quality checks tasks, the manufacturer will deal and filter the LCD TVs and provide the best product to the users.

If you buy a less expensive and from an unrecognized brand then it generates huge chances of having the issue of a dirty screen on your TV because they replace the quality checks to cut the manufacturing cost so that you can get the TV at less cost. So, always choose the best brand which is globally recognized while purchasing LCD TV.

Not only this but the availability of DSE is also seen due to the aging. If you buy an LCD TV and use it for years then the screen will start showing less brightness and small patches will also occur in your corners. If this issue occurs due to aging then it is common and it Indicates that you should buy a new TV.

How Can You Test For a Dirty Screen Effect?

Sometimes, these of DSE are available on your TV and you don’t even recognize the issue. When the issue of DSE starts playing on your screen then it is unrecognized.

You can’t see the difference in the performance of yot TV because the issue is minor. So, you ignore the issue and it will develop on your TV.

When the screen starts showing big patches and dark circles in the screen or the corners it will reduce the user expense then it will get recognized.

This issue can be noticed through various types. You’ll see large parallel or vertical patches. These patches can be on various areas of TVs, especially in the corner.

You’ll notice a difference in the brightness level of the TV which is disturbing sometimes. When you recognize the patches then the problem occurs.

With the passing time, the issue will enhance and you’ll face a less attractive user experience with your TV.

Make sure that the TV will be installed safely without any issues. That’s all you can do to prevent the issue of DSE in your TV.

How Can You Get Rid of The Dirty Screen Effect?

Well, let us tell you that there is not a single way to eliminate this issue from the LCD TV. It is a manufacturing issue, not a technical issue that can be set off easily.

Some websites recommend the solution to DSE by losing the screws which are placed on the back of the TV. We don’t recommend this solution because this will generate many serious issues on your TV.

If you’re seriously looking for a fast and effective solution for DSE then let us tell you that purchasing a new TV will be the only solution for you.

If you’re in the exchange period immediately contact the officials of the manufacturer and replace the TV.

If you’re in a warranty period then also take the help of customer service from the manufacturer. Well, if this issue occurs due to aging and getting a new TV will be the best solution for this.

On some TVs, there is a game mode. This game mode will enhance the brightness level of the TV which hides the issue of DSE. But let us be clear. You just hide it, so, it is not a clear solution.

See the best 43-inch LED Smart TV with no DSE.

What is a Panel Lottery?

Panel lottery is a game for the users who buy LCD or LED TVs. Well, it is a game that is played by the user unwittingly once the user purchases the LED TV.

It is nothing but just a tag that the user will get a panel-free TV. When you buy an LCD panel you’ll get enrolled in the game and when you use the TV without any issue then the company recognizes you as the user ” Getting a Dirt-free panel”.

Thinking Of Buying A New TV? If “Yes” then be sure to check out our comprehensive buying guide for new LED TVs. And also check out our television review section, we think it will help you a lot to make your buying decision. 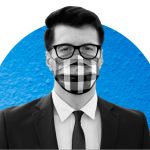 He is a consistent contributor to BSL. He is also an Imaging Science Foundation level II certified video calibrator like Bishnu. He has been contributing to BSL for more than 2 years. He is a multi-talented technical person but primarily focused on the part in which he holds the foremost authority. Abhishek has tested and reviewed smart TVs for popular sites like HomeTheaterReview.com and has every tool and knowledge required for objective testing.